The library as a symbol of enlightenment 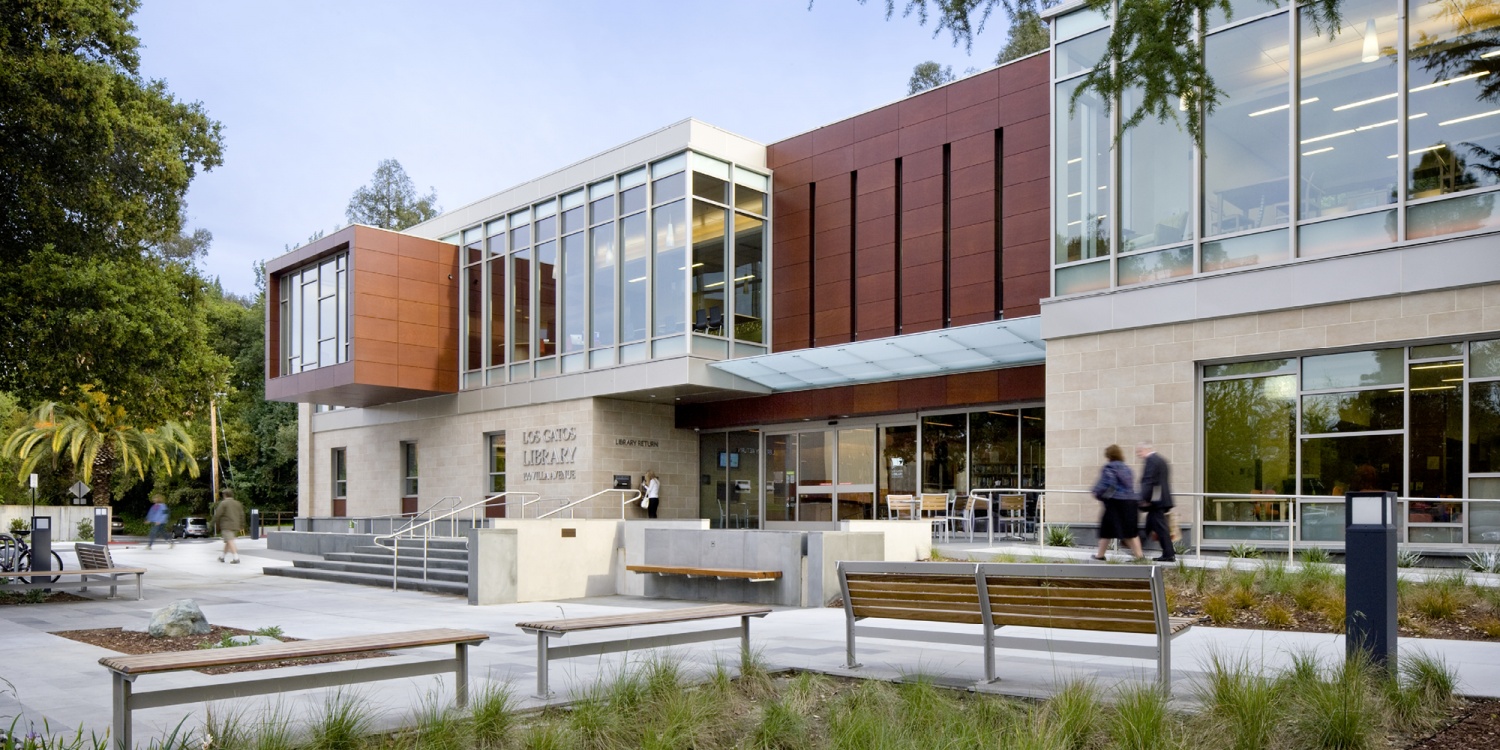 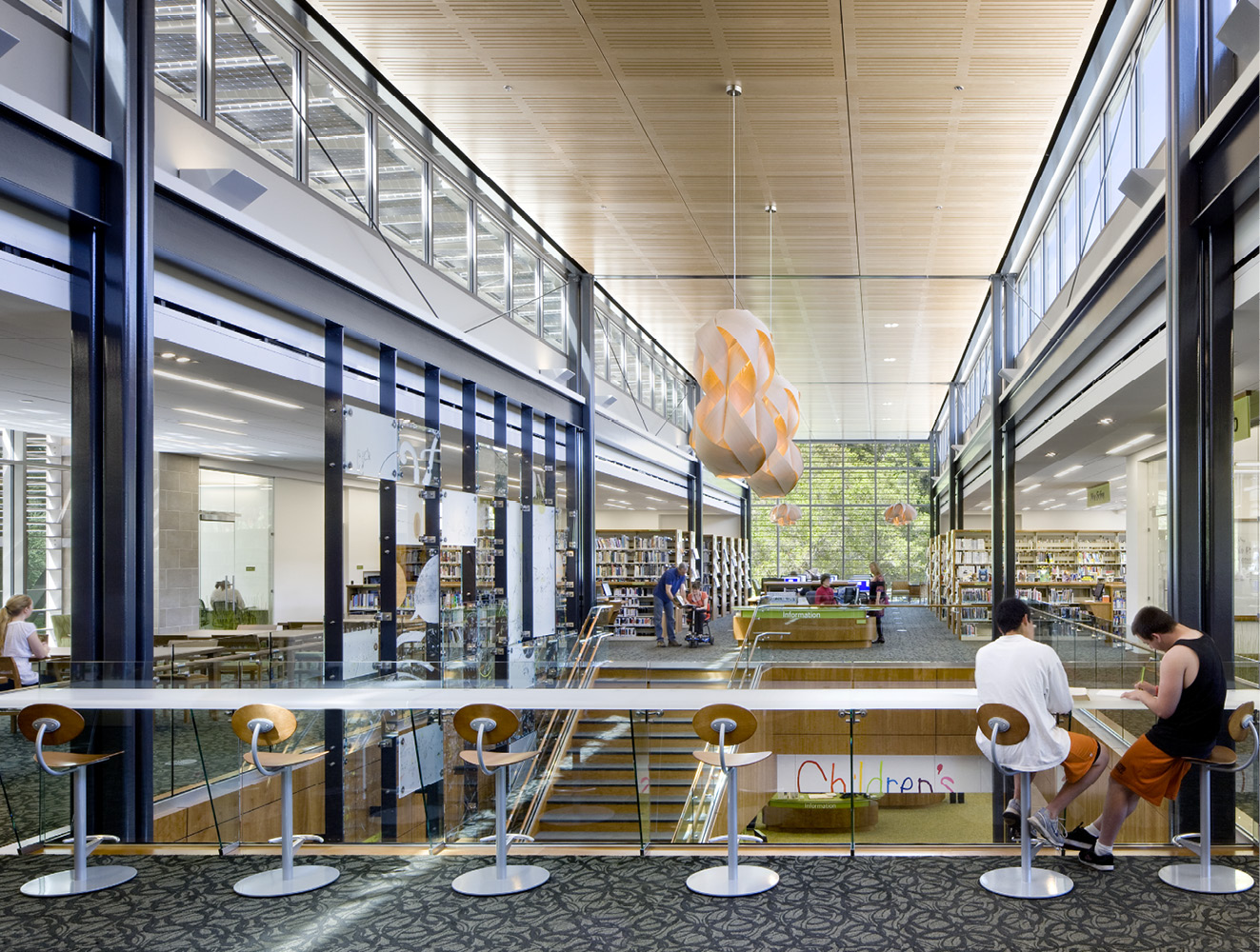 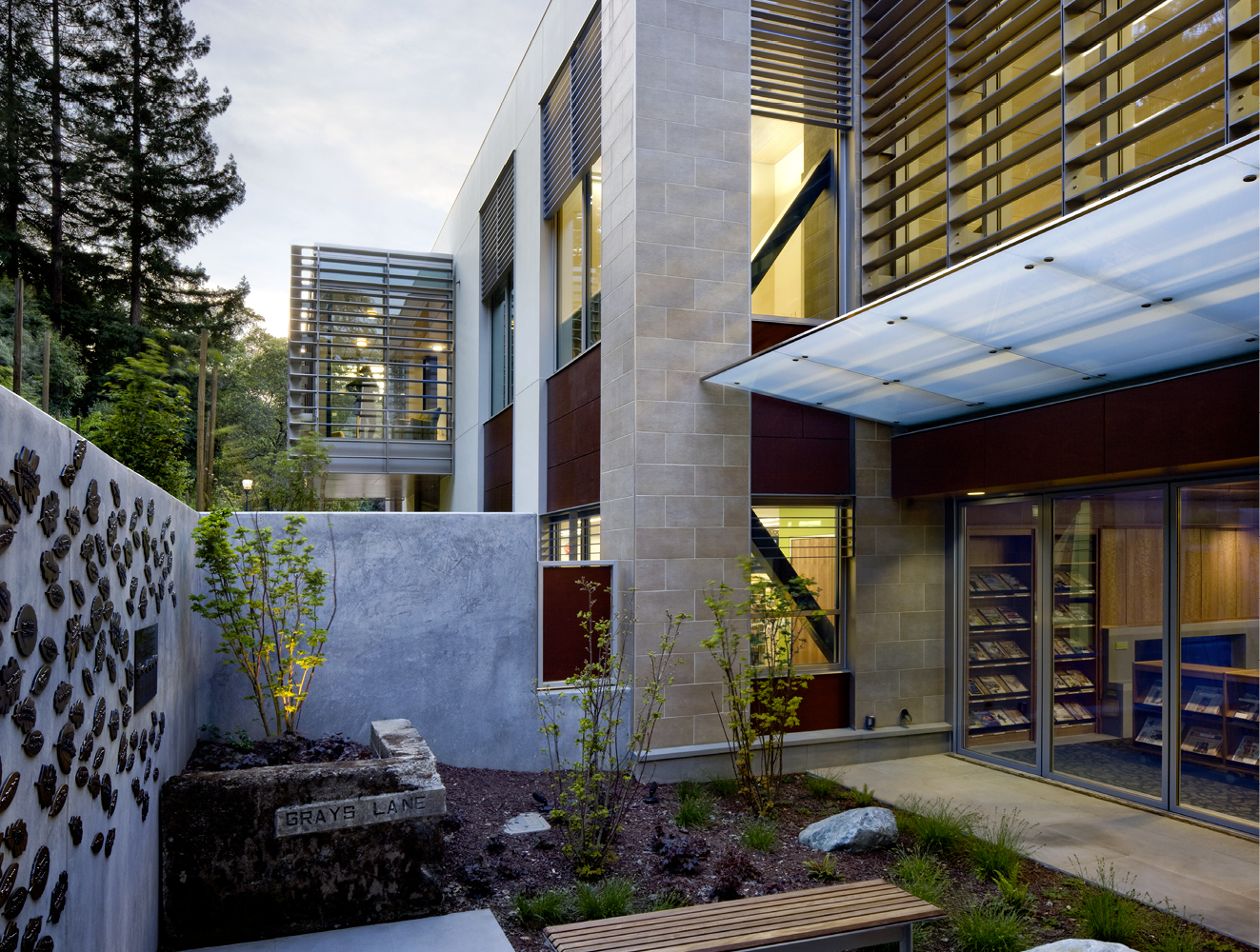 “I THINK MR. ANDREW CARNEGIE WOULD BE SATISFIED WITH WHAT THIS GROUNDBREAKING IS ABOUT TO PRODUCE. AT THE LIBRARY, KNOWLEDGE IS AVAILABLE FOR TAKE-OUT. ALL YOU HAVE TO DO IS ORDER.”
- LYN DOUGHERTY

FORMER PRESIDENT, FRIENDS OF THE LIBRARY

Nestled at the foot of a wooded hillside, the new Los Gatos Library is a key element in a broad master plan that strengthens the connection between the town’s civic center and the historic Pageant Park. The building responds to existing structures but does not mimic them, acting as a destination and an anchor. While the new library is undeniably a modern structure, it fits into the existing area through the exterior’s natural hues of concrete, stone, and wood-veneer panels that reflect the colors of the surrounding environment. With its rectangular form, the two-story public library complements the adjacent 1960s civic center, an elegant masonry building.

“We really wanted to create a connection with, and a contrast to, the existing 1960s-era Civic Center building.” -Chris Noll, Principal in Charge

The inspiration for this 30,000-square-foot building comes from the lantern, allowing the library itself to become a visual play on the word “enlightened.” During the day, glazing on the north and south walls invites sunlight in, creating a warm natural glow. At night, artificial illumination projects outward, turning the library into a welcoming beacon that anchors the neighborhood – a literal light in the woods. 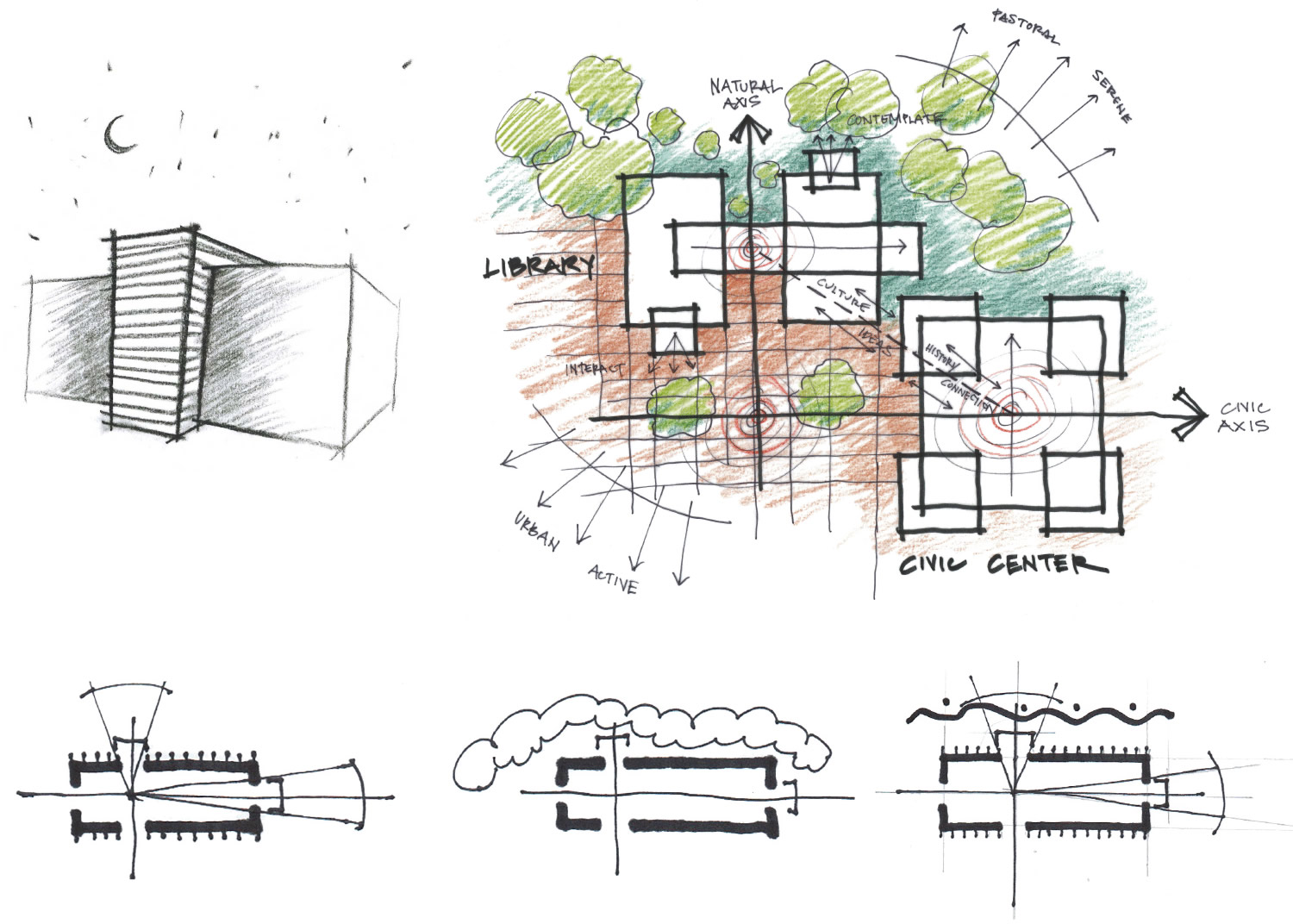 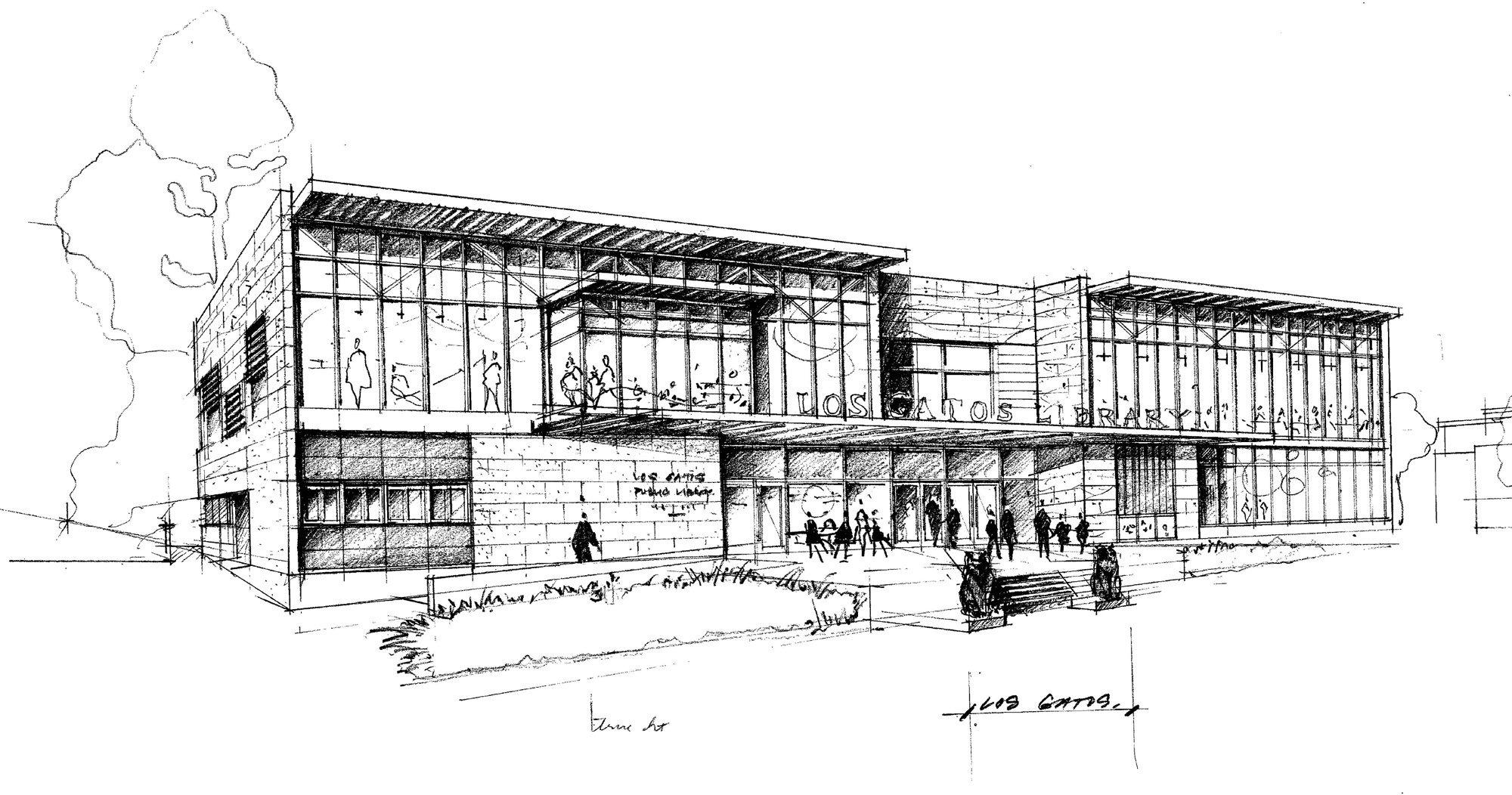 The footprint of the new library was limited by the hillside behind and the desire to preserve mature trees on the site. This led to a simple rectangular form with pop-out design features on the second floor. Because of the simple shape of the building, a greater portion of the budget was available for higher-quality materials – exterior tile cladding, wood veneer panels, upscale lighting fixtures, and generous amounts of glass – meeting the client’s goal to create a civic showpiece.

Working with our lighting consultants, we developed a building that radiated light and warmth. The interior’s maple ceilings reflect warm light into the core of the building. As dusk approaches, fluorescent ceiling fixtures gradually illuminate the extended window walls, and the lighting from within shines off the glazed facade and exterior wood-veneer composite paneling. A stretch of glass around the exterior of the library at the second floor has color changing LEDs that subtly move from amber to blue to purple throughout the evening. 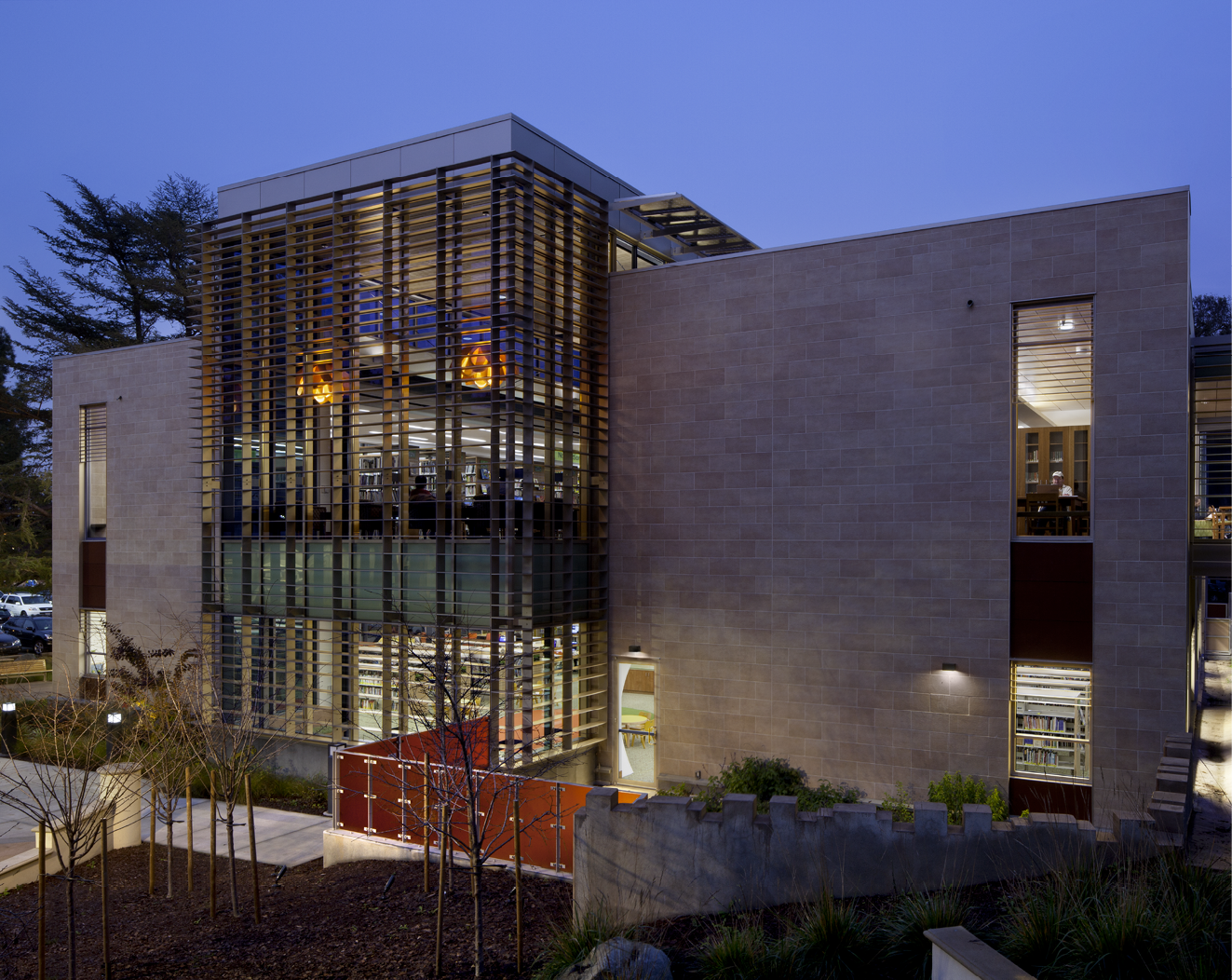 “YOU DON’T SEE THE VERTICAL SURFACES WHEN YOU’RE APPROACHING THE BUILDING; YOU SEE THE LIT CEILINGS. IF THERE’S LIGHT BATHING THOSE SURFACES, THAT IS WHAT REFLECTS THROUGH THE WINDOWS.”
- ALICE PRUSSIN 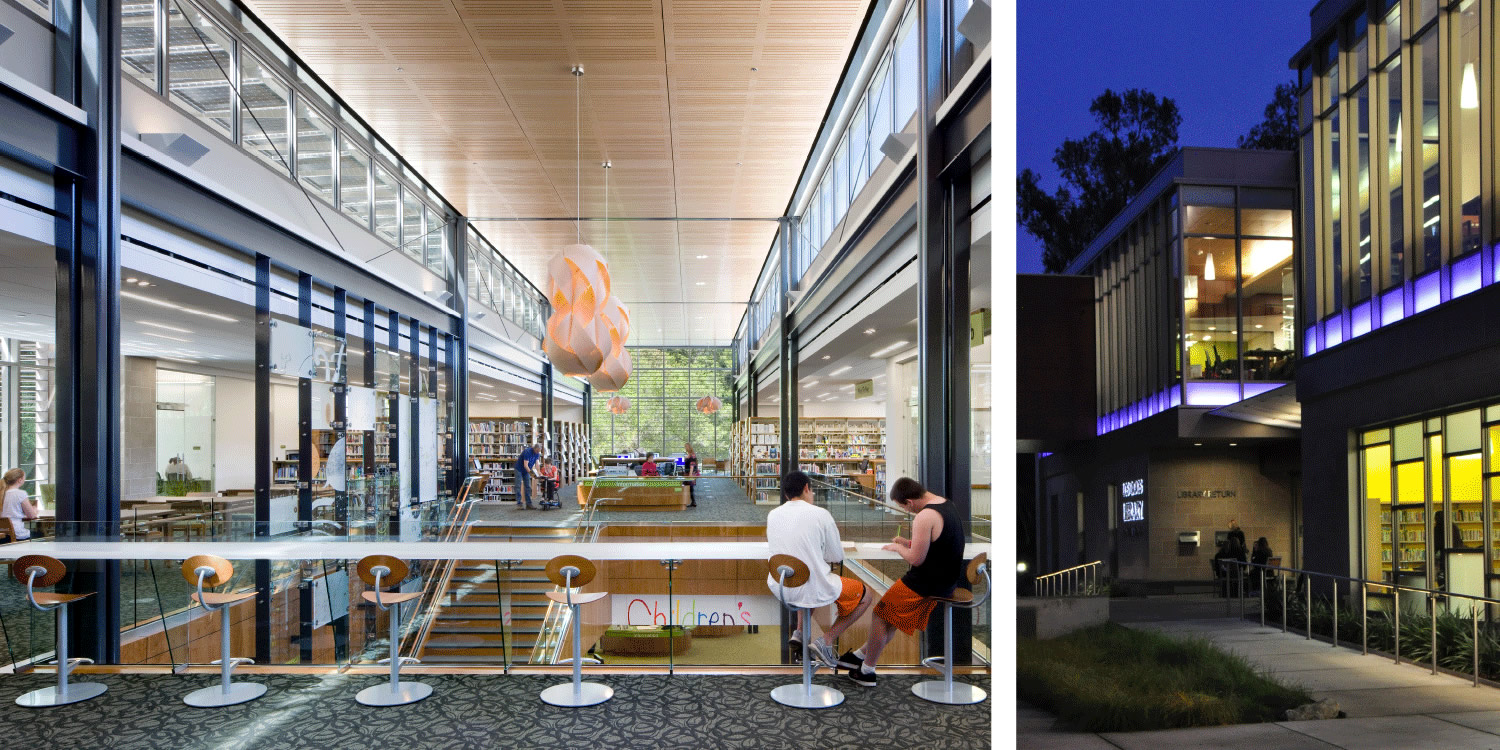 Downstairs, visitors enter the children’s library under a glowing rainbow sign and find themselves beneath a 75-foot-long illuminated starry sky full of constellations, planets, and spaceships. The curved ceiling panel was fabricated directly from the architects’ digital 3D model and is installed below a ceiling painted yellow and uplit by linear fixtures. The celestial theme is continued in the circular reading nooks built into the east wall of the children’s area. 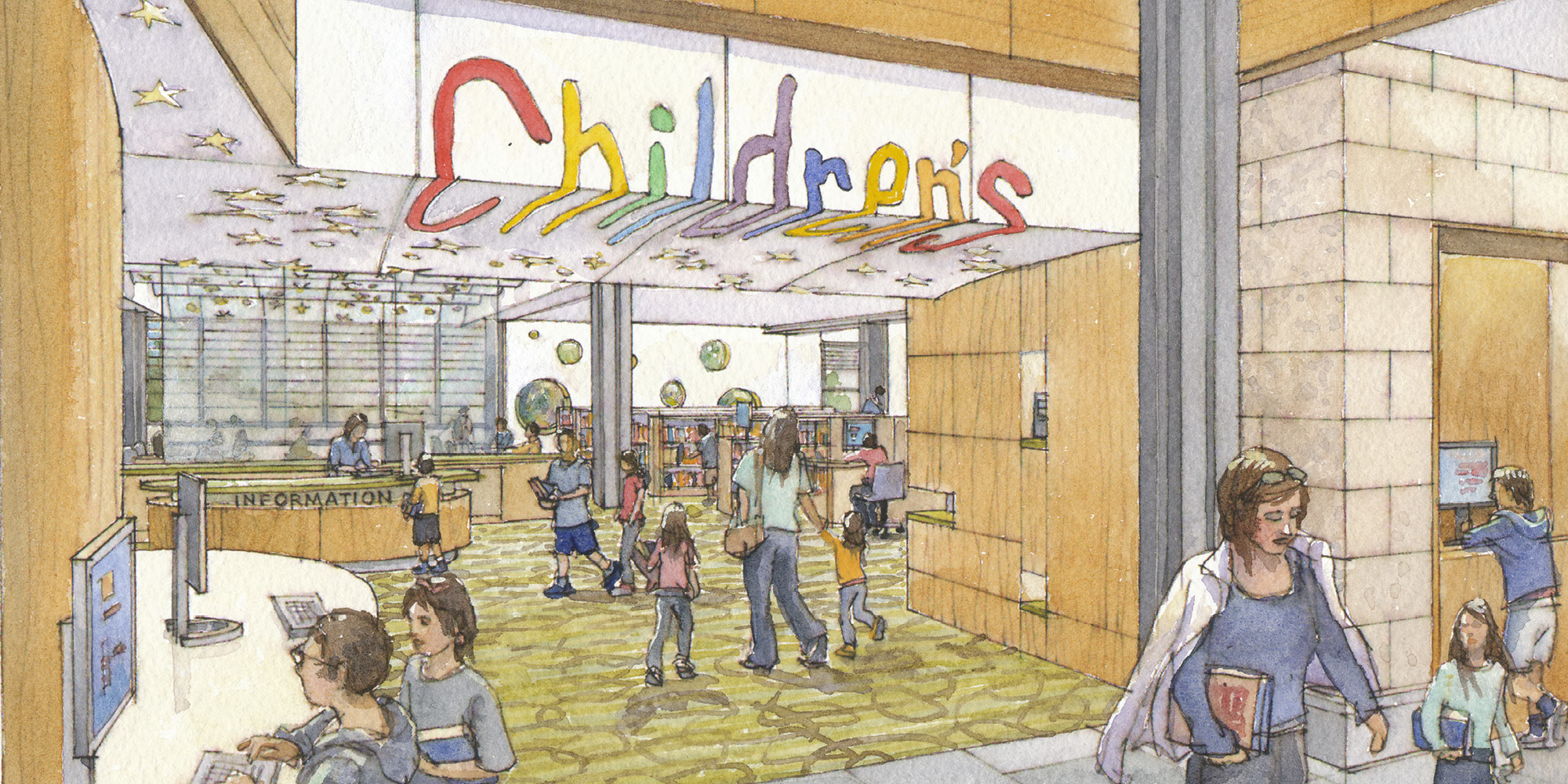 REALIZATION OF THE LIBRARY 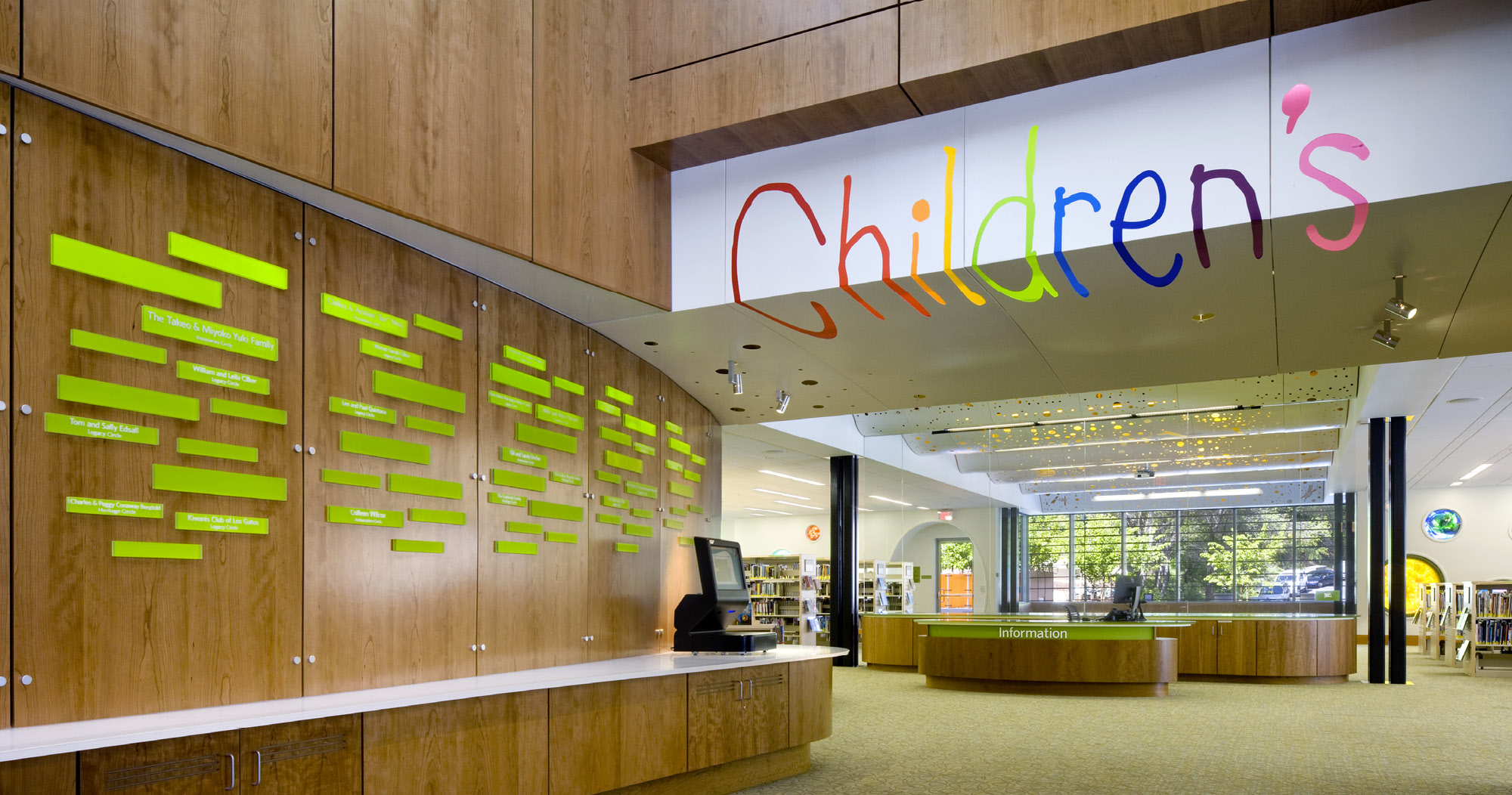 The library offers spaces for teens, children, seniors, and history buffs. The spaces of the library have been successful at serving their purpose and providing flexibility for the future. The teen space is heavily used, with an estimated 20,000 teens visiting the library in 2016. The downstairs periodicals reading room has also been a success, with its dark wood-paneled clubby atmosphere complete with a fireplace. And these areas can be reconfigured, seamlessly arranging furniture to expand or contract the space as the programs may demand. The floor-to-ceiling glass doors to the outside in the periodicals room can be opened to expand the area on sunny days, or for special events.

Achieving LEED Gold certification through the use of sustainable and renewable resources, the proof of the library’s success can easily be measured: the old library had 222,000 visitors in 2010-11, and, in contrast, nearly 324,000 people visited the new library in 2015-16. It is our hope that by thoughtfully designing a building that is grounded in the present with respect for the past and an eye to the future, the Los Gatos Library will evolve with the community’s needs and continue to be a beacon of learning for today and tomorrow. 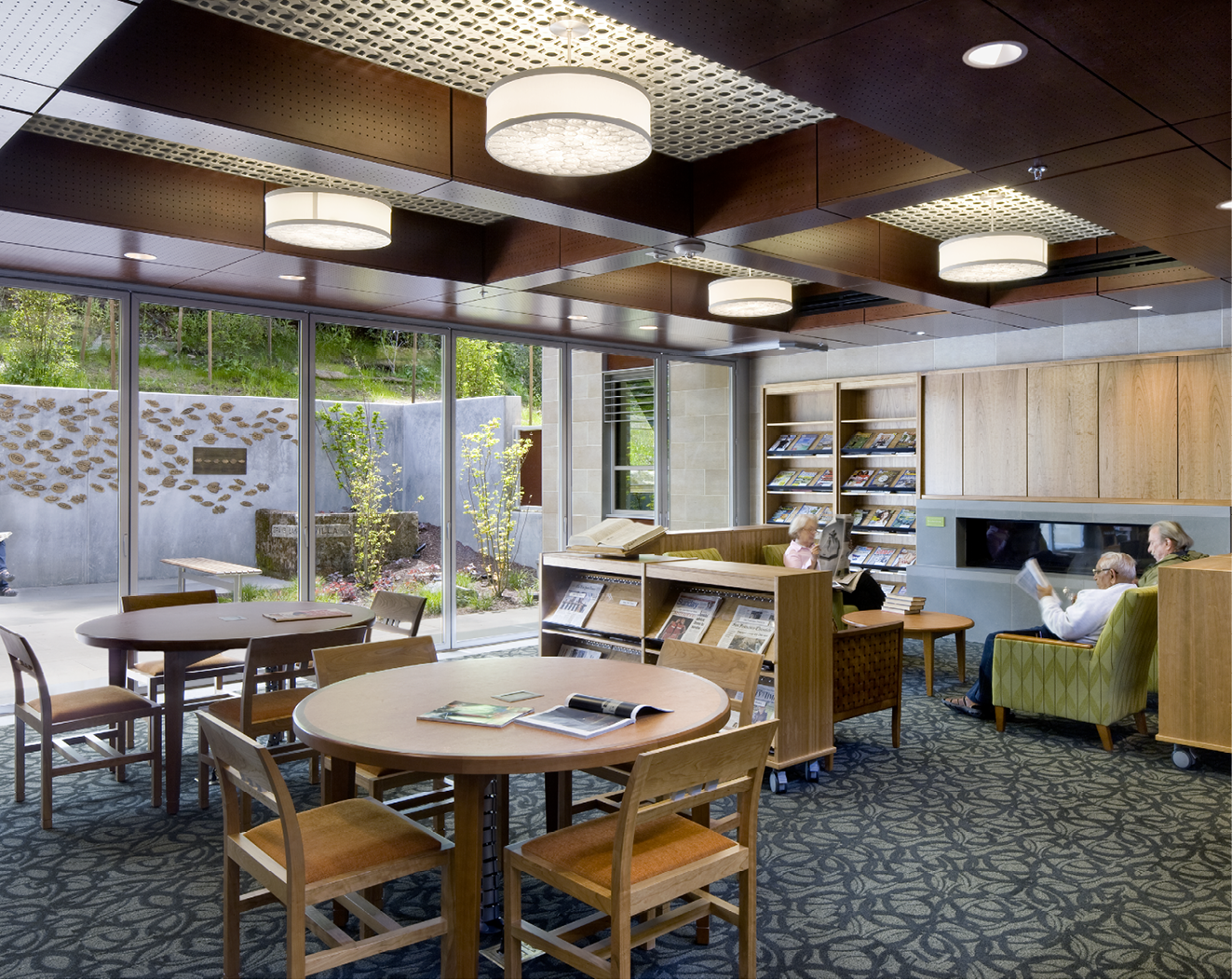 “WE ARE THE COMMUNITY’S LIVING ROOM.”
- LINDA DYDO 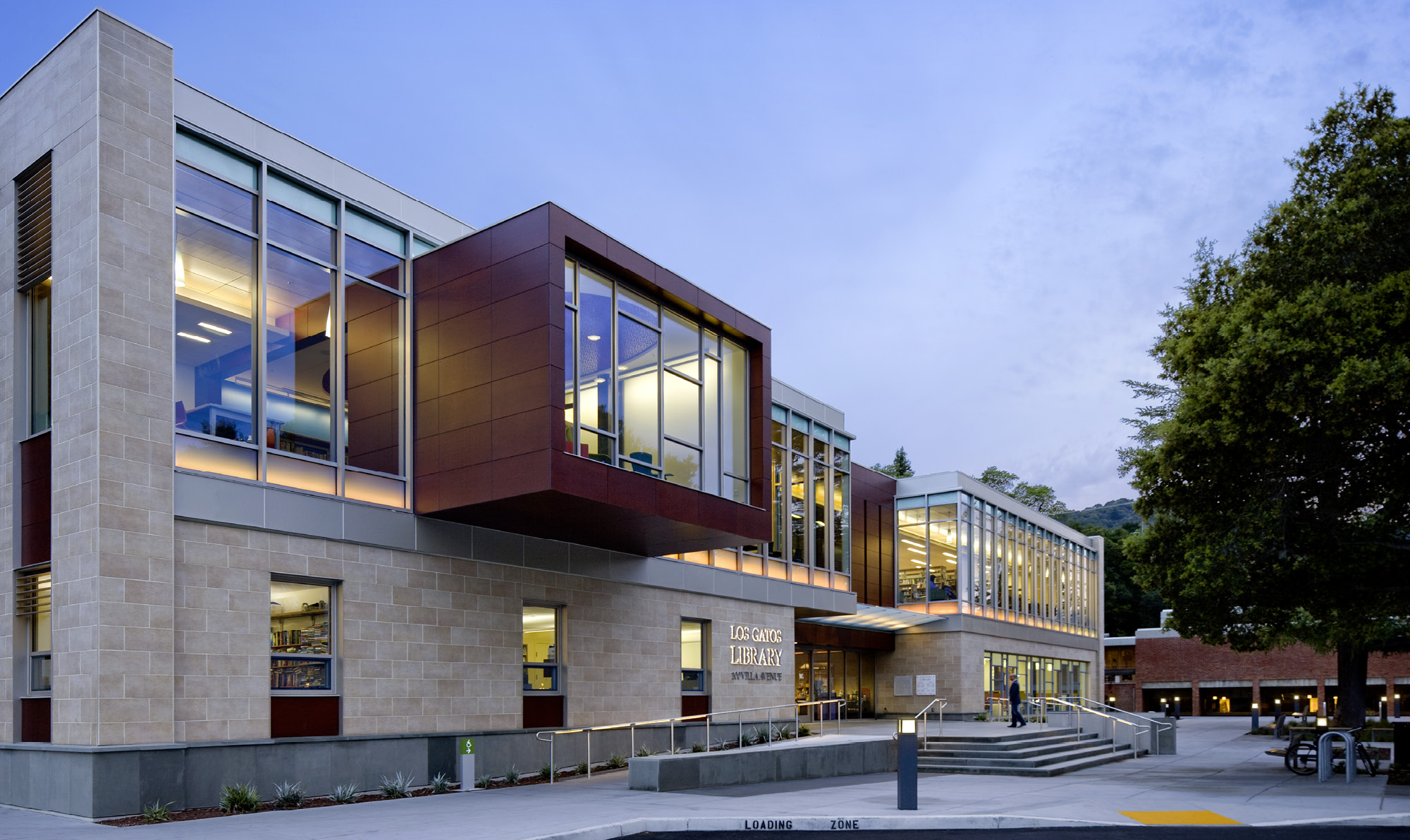 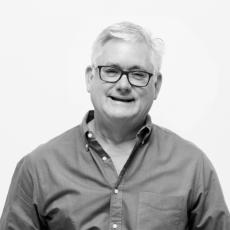 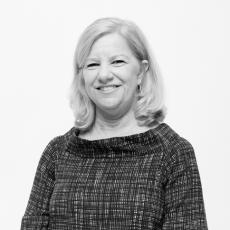