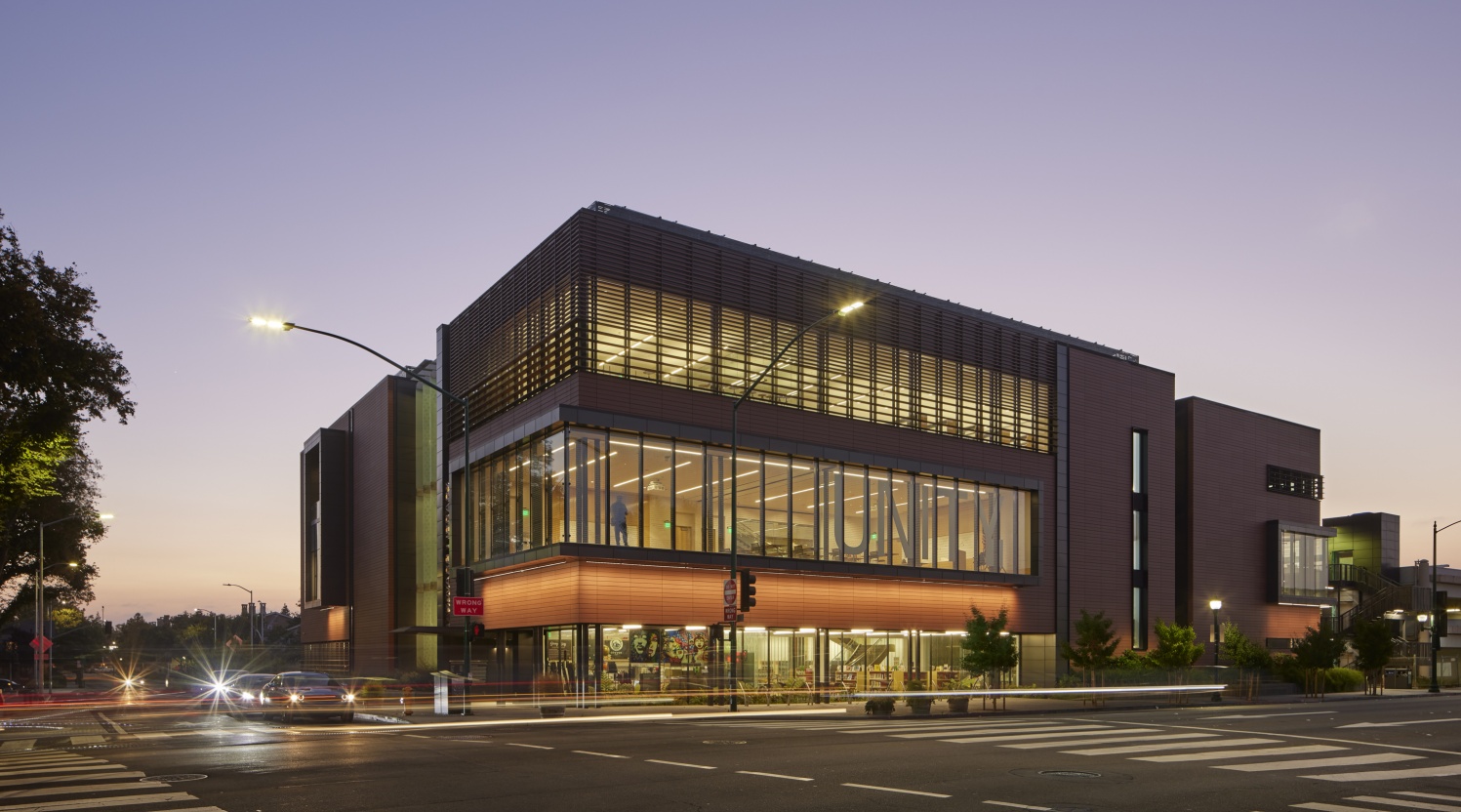 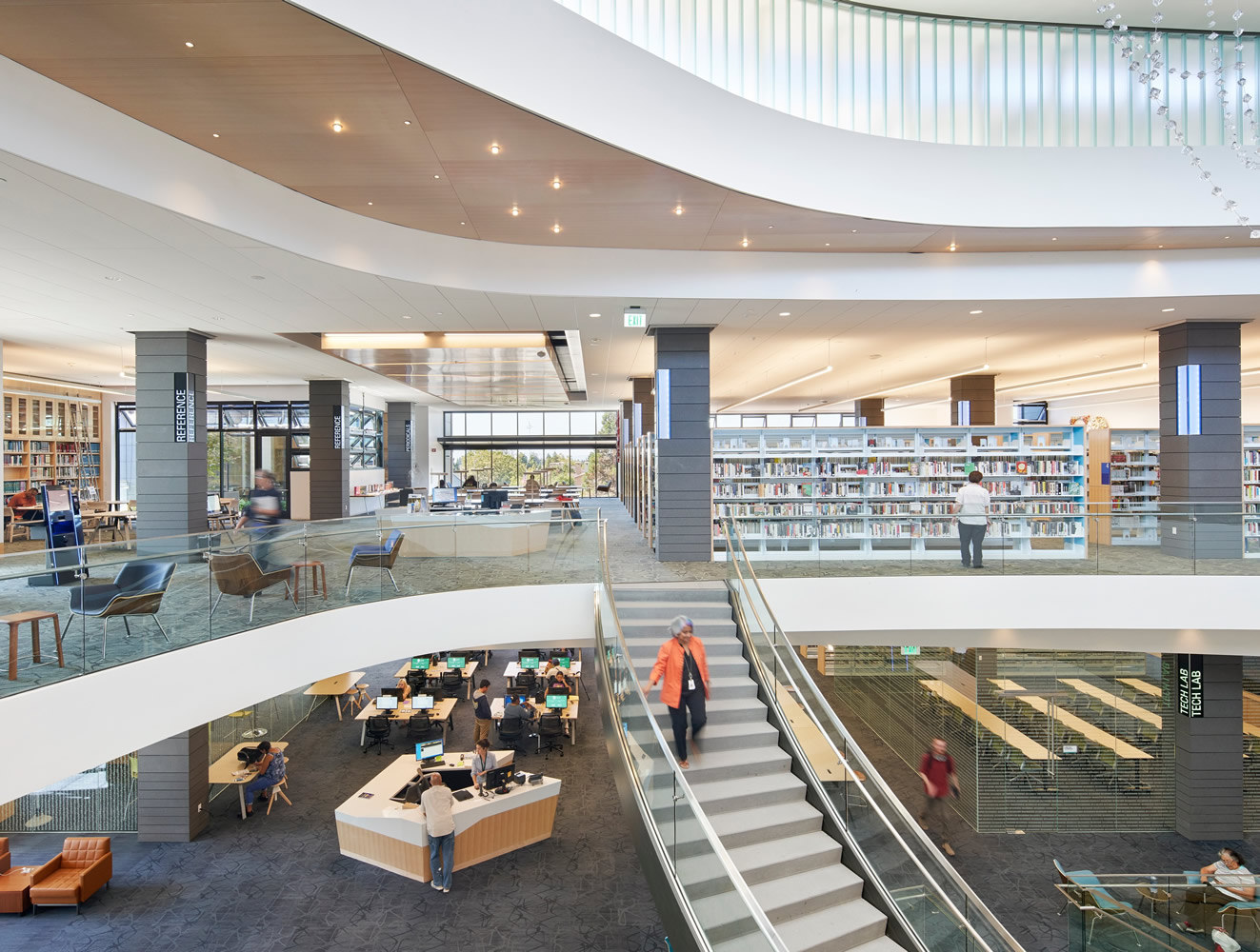 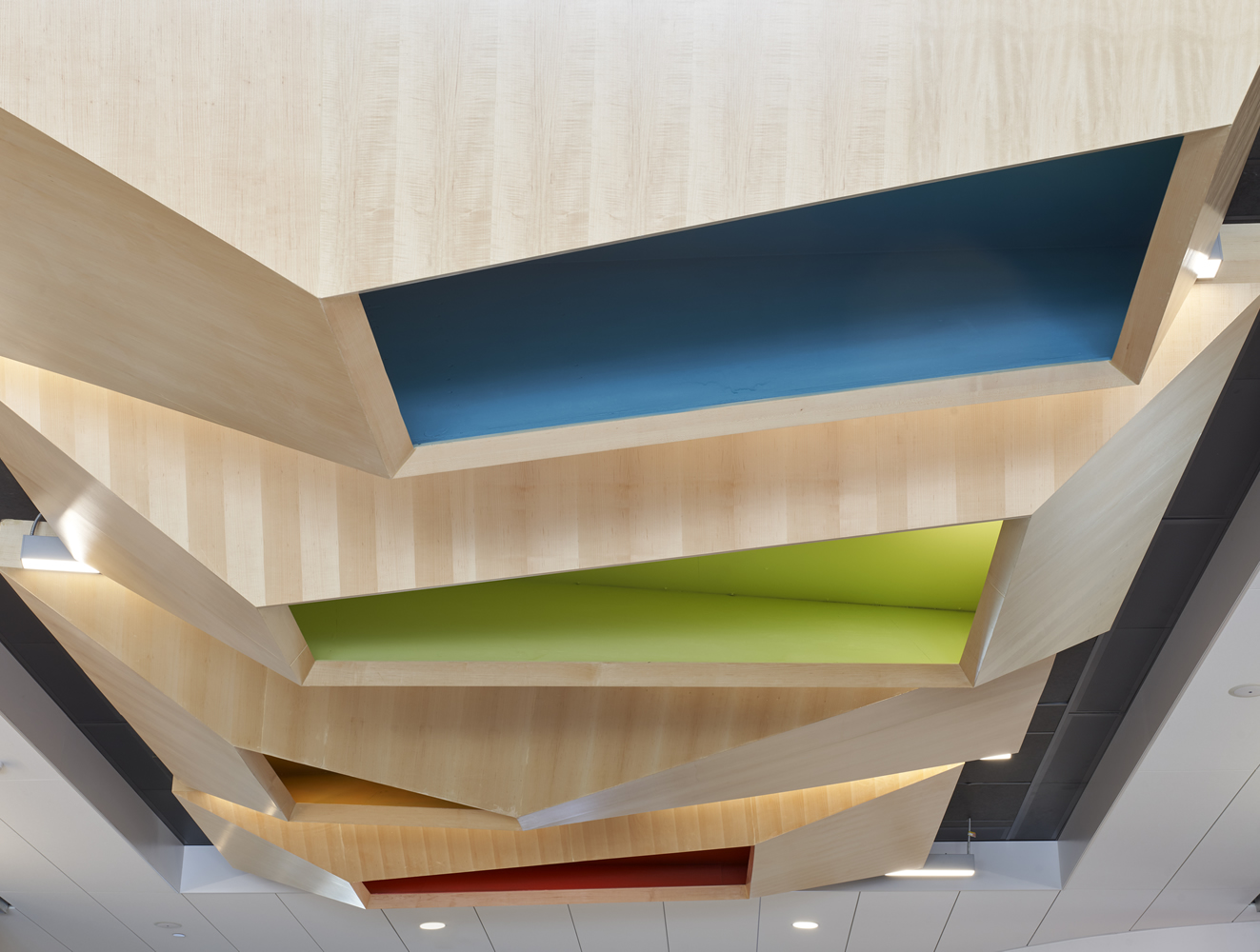 Leveraging Hayward’s motto, the “Heart of the City,” the new Hayward Public Library is a three-story, 58,000-square-foot, zero net energy building designed to serve as the new cultural, intellectual and educational nexus for the city, while simultaneously setting a benchmark for environmental sustainability for Hayward and the region. The realization of a new 21st Century Library in the City of Hayward is the synthesis of human, cultural, and economic factors that came together to revitalize the downtown core. This Library and Heritage Park is a model for how civic institutions play a vital role in transforming communities, instilling pride and lifting spirits.

“I think Mr. Andrew Carnegie would be satisfied with what this groundbreaking is about to produce. At the library, knowledge is available for take-out. All you have to do is order.” - Lyn Dougherty, Former President, Friends of the Library 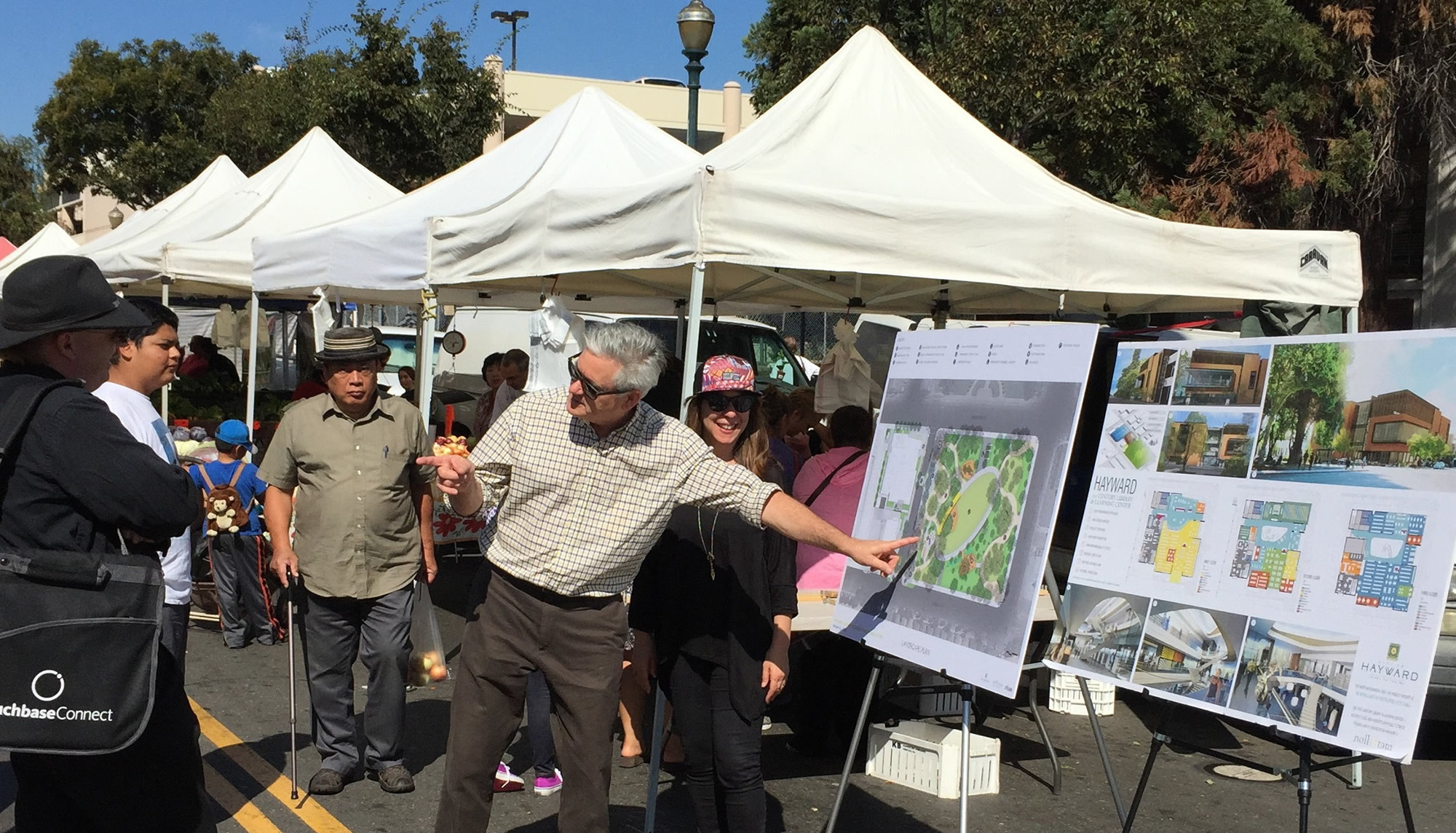 As cities have changed and developed over the last few decades, their infrastructure needs have necessarily evolved and developed alongside. This includes not just physical infrastructure, but social infrastructure as well—the spaces and services that define and create community, identity, and belonging. These spaces, such as libraries, parks, neighborhood hangouts, and even some businesses, serve both to enrich the daily lives of residents, and to create the unique identity that differentiates one city from the next. However, while there is (usually) a clearcut path to implementing required physical infrastructure updates—it’s hard to argue with an overburdened sanitary sewer system, for example—it can be harder to find support and consensus for rebuilding the elements that make up a city’s social infrastructure. Too frequently, these important spaces are considered “optional” or luxuries, and so the capital expenditure required for significant re-visioning is perceived as a lower priority.

“We had a force from the Friends of the Library that went out and walked the community, and said “What’s your vision, what’s your need?” - Fran David, former City Manager

This was certainly the case for the new Hayward Library, a project that was over 20 years in the making. When the replacement of the main library was first proposed in the early ‘90s, the prevailing sentiment in the community was that the city didn’t need or merit a top-quality new facility, and a bond measure to fund it failed. This failure set in motion a more than 20-year process to engage the public in a wide-ranging discussion about the value of the library in their community, and to develop a more substantive and far-reaching conception of the nature of social infrastructure overall.

This process had three primary drivers:

There is no question that the implementation of the new Library would not have come to pass without significant active, public advocacy efforts. Galvanized by the failure of the initial bond measure, the Friends of the Library group quadrupled its membership from 75 to 300, and spearheaded a wide ranging campaign of public information to generate support for the project. This grass-roots effort was critical in cementing official city leadership backing, and allowed the project to progress with planning studies, design conceptualizations, and a variety of presentations at public meetings at farmers markets and other community events. A new tax measure passed with over two-thirds of the vote.

A second defining factor was the adoption of a broader, and more integrated, vision for the library’s role within the community. A major part of this approach was to use the library project as an opportunity to reconsider the broader context of downtown Hayward—it needed to respond to the planned urban density, and the changing character of the surrounding neighborhood. By moving the building out of the center of the adjacent civic park and locating the building on the edge of a restored civic plaza, the project restores open space and sites the library closer to supporting infrastructure. Ultimately, the Library became a centerpiece of the revitalization of downtown Hayward, as well as serving as an example of the City of Hayward’s commitment to sustainability. Many of the performance criteria developed for the Library have become codified as part of Hayward’s citywide sustainable building guidelines. 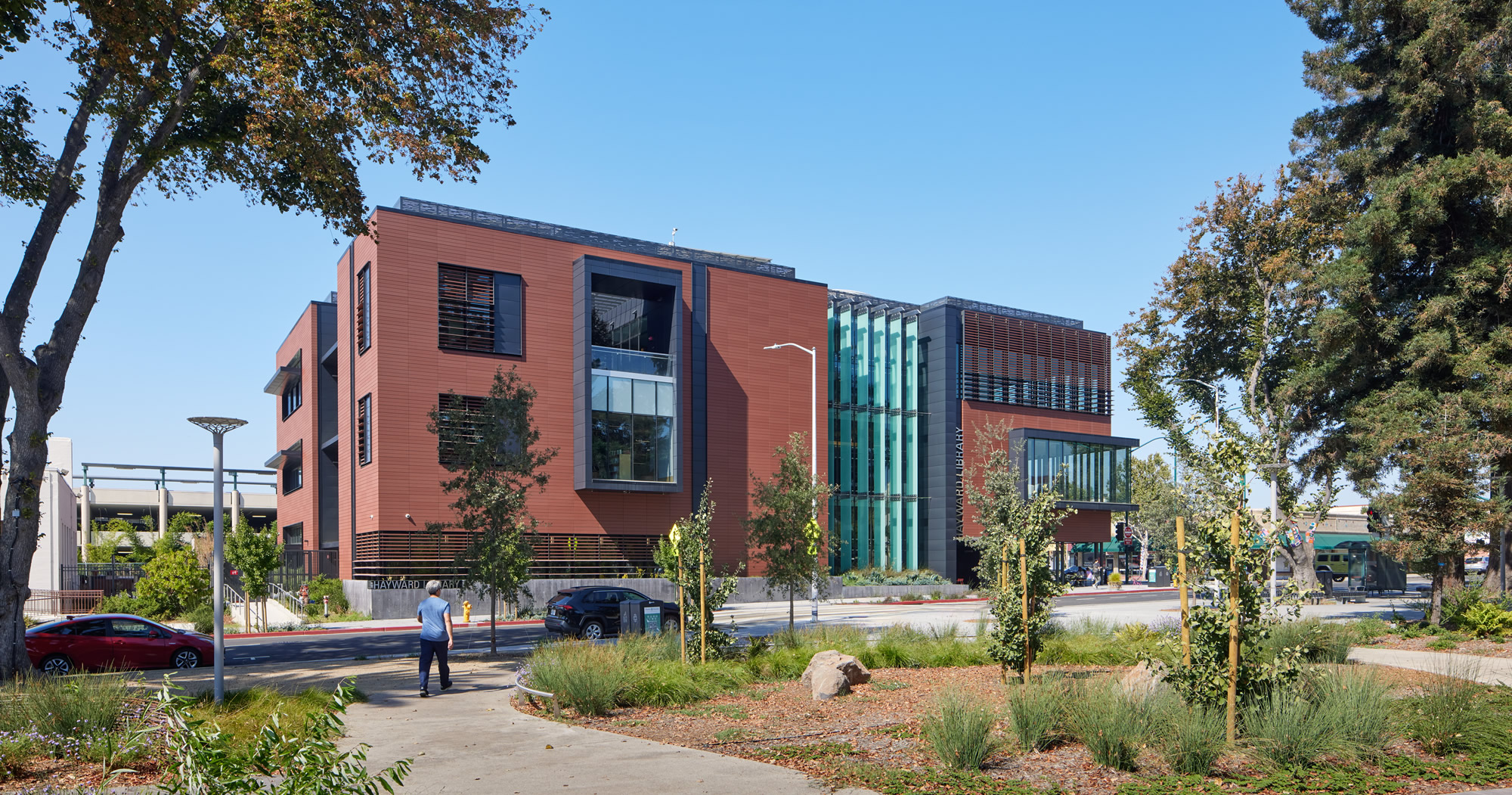 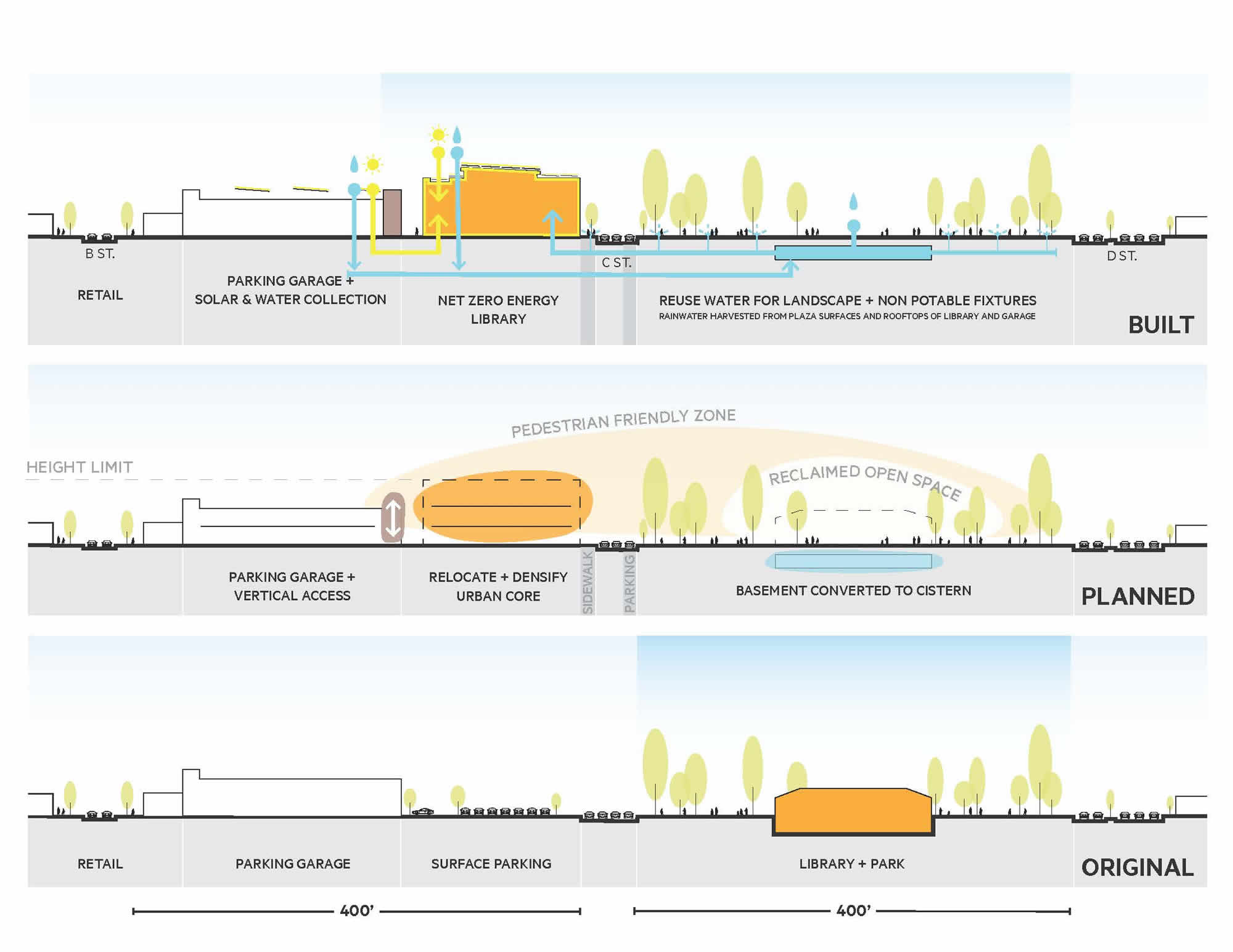 By definition, social infrastructure is, well, social. Unlike the measurable performance data generated by city utility infrastructure, the success of any individual element comprising a location’s social infrastructure is defined by the experiences of those who use it. The process set in motion over 20 years ago provided a vision, but it comes to life in the activity within and around the new library spaces—from the public meetings occurring regularly in the community function spaces, to the flexibility of the social spaces for different age groups, to the newly reinvigorated connections to the adjacent park. It is a place of active learning, experiments, and social space. It is active, lively, and fun, and promises to provide a vibrant social infrastructure for the Hayward community for years to come.

Together, the library and plaza project has spanned 16 years of community process, design, and construction, bringing together city officials, community stakeholders, and residents. With its integration of multiple functions and user spaces, it is designed to meet the demands of Hayward’s diverse community. It is a centerpiece of social infrastructure—a state-of-the-art, adaptable and inspirational space where everyone is welcome to make it their own.

“It’s a game changer. It’s a beautiful building and a showpiece in technological advancements.” -Jayanti Addleman, Director of Library Services for the City of Hayward

The building's calm terra-cotta façade, with large expanses of glass, takes its form from the innovative composite structural system, which pulls the structural supports to the exterior of the building, allowing the interior to be light-filled and open around a sculptural central atrium. This atrium was carefully designed to bring natural light into the building’s core. It also organizes the interior spaces, helps patrons with wayfinding, opens up the building internally, and is the signature feature with its grand staircase.

“The idea that came to the surface was the concept of the “Heart of the City.” This concept was our touchstone throughout the design process, and is physically manifested in the atrium, which opens the building up to light, movement, and interaction on every floor.” - Chris Noll, Principal in Charge

ASCENDING THE TIERS OF KNOWLEDGE 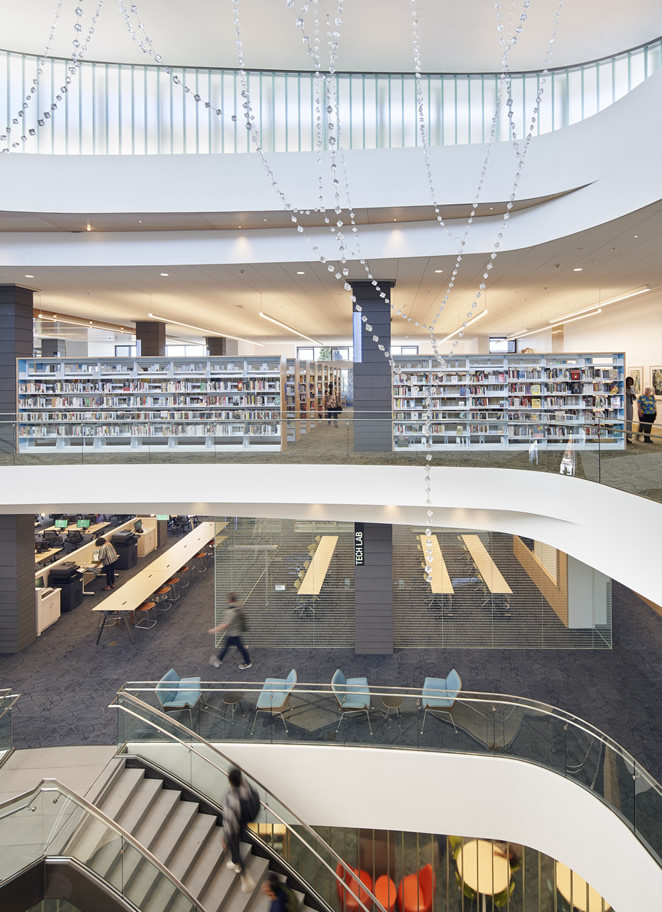 Each floor builds upon the previous, reflecting the advancement of knowledge through different seasons of life. The first floor is foundational, teaching fundamentals with the children’s area, a tween zone, and a dedicated homework tutoring center. It is lively, active, and fun. The second floor is about community and technology, and includes a teen area, a technology classroom, the digital media creation lab, a makerspace and a large community conference room. It is a place of active learning, experiments, and social space. Finally, the third floor has focused quiet areas with the main print collection, a quiet reflection lounge, and several reading rooms. 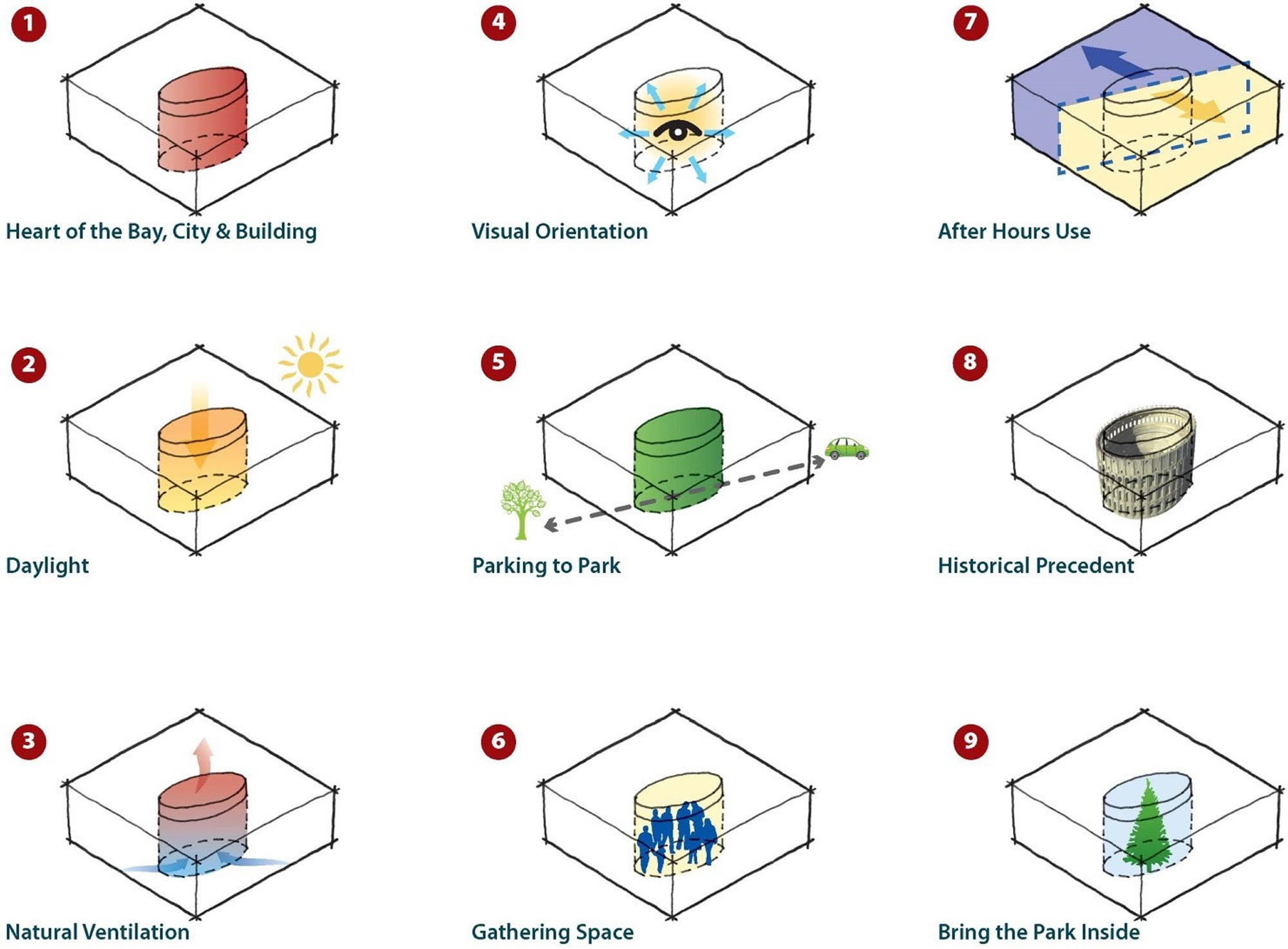 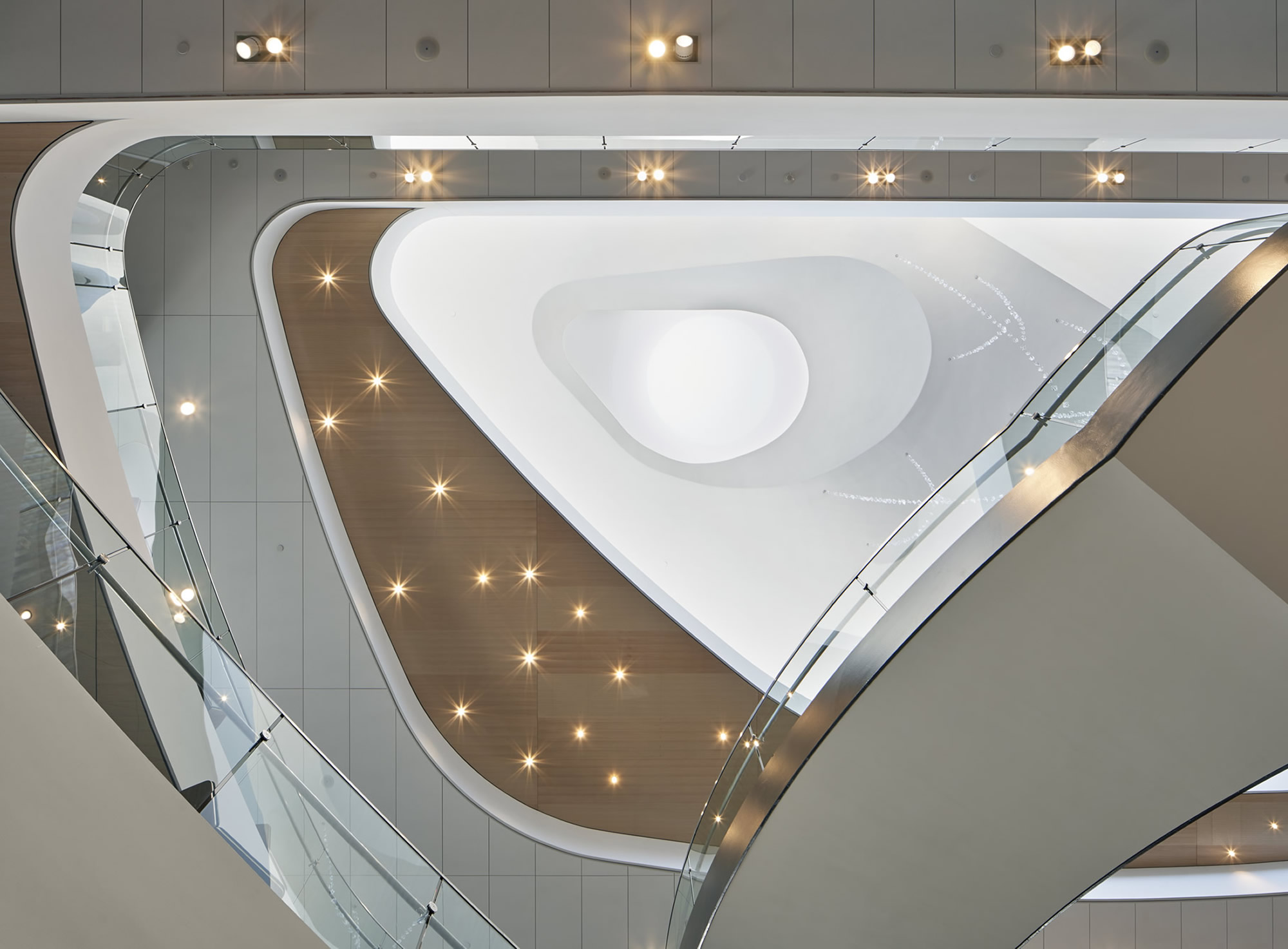 INSPIRATION FOR THE FUTURE

In October 2022 the Hayward Library and Community Learning Center was honored with a Special Commendation in Design for Integration by AIA California. The project team is proud to be recognized with this honor and hopes it will inspire future civic projects to go above and beyond for generations to come. 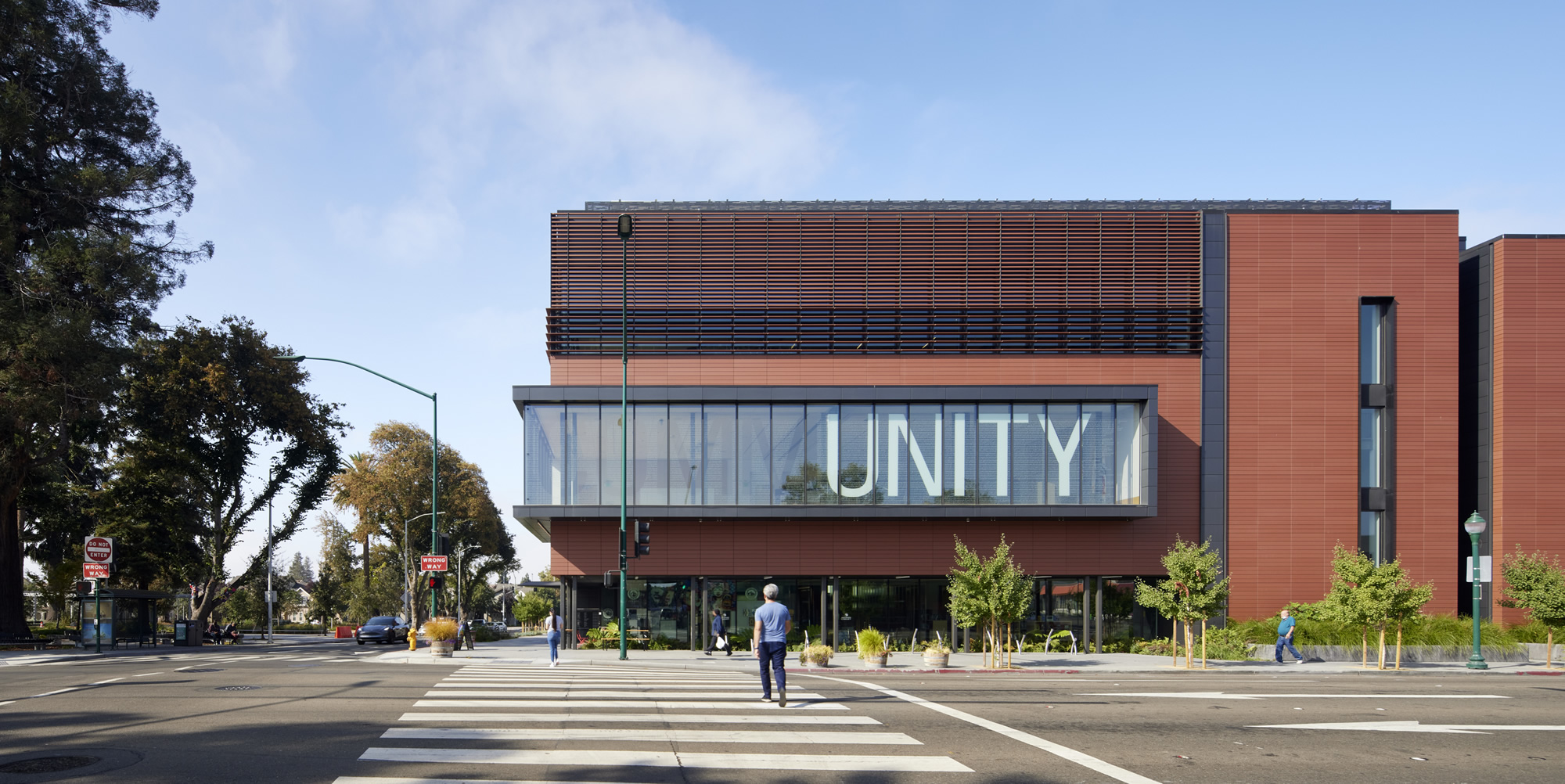